It must have happened to all of you, some time or the other. You come across a person about whom you don’t know much or with whom you don’t have much to deal, and yet towards whom you feel drawn in spite of yourself. Asu Dev — or Asuda as he was endearingly called by most of us— was such a person. You might have met him for a short while, you might have liked him a lot or not so much perhaps, but you could not afford to ignore him. There was something in him,that touched you deeply and left an imprint on you. This was true of Asu Dev the man as well as Asu Dev the artist. 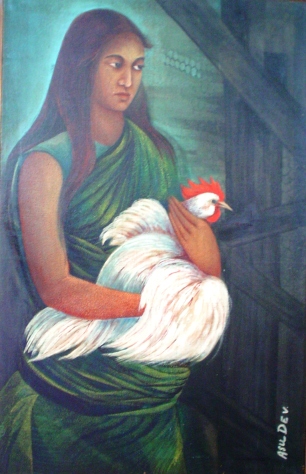 In recent years I had the occasion to meet Asu Dev fairly frequently at the Gauhati Artists’ Guild— a bearded, bespectacled figure that age had failed to subdue. He was so full of verve and vigour that often “it appeared to me as though he was the most youthful and ardent of the young group of artists making up the Guild. Yes, normally he was so outgoing, ever so ready to talk, and frequ­ently so effervescent. And yet, at times he seemed so distant and incomprehensible. There was this enigmatic quality about Asu Dev’s personality that intrigued me

My first memory of Asu Dev goes back to 1952 when I had just done my I.Sc.   He was holding a one-man exhibition of his paintings at theKamrupAcademypremises: a dozen or so canvases somehow hung on the walls of a shabby looking poorly lit room. I was among the curious lot that had turned up to “see the show”. That was my first exposure to a full-fledged art exhibition, and incidentally, that also happened to be one of the earliest art exhibitions to be held at Gauhati.   (Or, was it really the first?) I found a few of the “spectators” putting some rather irrelevant and inconvenient questions to the artist, and the latter trying frantically to explain to a non-too-receptive group how and why he had painted the pictures the way he had. I also looked at the pictures with wide-eyed wonder had felt a strange sense of achievement at having seen a real art exhibition.   But more than the paintings it was the artist who had left a lasting   impression   on  me— a  harassed-looking figure   at   pains   to explain in literal  terms what  he  was   trying  to  communicate through  the medium of  his art.    That day  I a mere novice  in  another medium,  had  perceived through him,  intuitively almost, the anguish  of a creative artist    which   I   had the   occasion to  realise more fully in my later  years.

It was in 1961, just after my marriage, that I saw Asu Dev next— this time at the residence of one of my newly-acquired relations at Gauripur. He was then the design adviser attached to the Rani Sarojbala Nari Silpa Samiti of Gauripur (a training-cum-production centre looked after by the late Smt. Nilima Barua), creating designs for textiles and clay and wooden figures, mostly based on indigenous folk motifs. I was fascinated by some of the specimens which I saw in the collection of the Samity and also in that of Smt Niharbala  Barua.

But I first saw Asu Dev’s paintings with any degree of an art lover’s interest only in the late 1960’s when Gauhati started having art exhibitions. His famous The Cage cast its immediate spell on me when I first saw it in a group exhibition in 1968, and I am yet to outlive than spell. The Morning, a smallish piece showing bamboo clusters? In shades of blue, adorning the drawing room of Professor Praphulla Datta Goswami, has been another of my favorites.

As for the rest of his works, while I have seen just a few of the originals, I have seen only photographic reproductions of most of the others. This fact, coupled with the more important one that I am no art expert, precludes me from passing judgments on Asu Dev’s creations. What follows is simply a series of very personal reactions that his works have aroused in ms as a layman who enjoys looking at objects of   art.

One of the foremost things that come to my mind while surveying Asu Dev’s paintings is that there is a kind of sensuous quality about them, whether in the choice of subjects or in the manner of treatment. As it is, earthy female figures predominate in his paintings. (I have noticed only two with male figures). What is more, nude female figures, plump and rounded and voluptuous, form the subject matter of a number of his paintings spanning his entire career, starting from Autumnal Pleasure, Santhal Virgins, At the Water Fountain and The Gossip (all belonging to the 1936-40 period) to The Nude (1975) and After First Shower (1975). Judging from his nature landscapes Ike   The Wake (1948), Hide and Seek (1964) and a host of others, it is clear that the artist was attached to nature almost as passionately as to the female figure; He treated both with the same loving care verging on caress. (Is it not significant that one of his landscapes featuring undisturbed hills and forests is called Virginity? Often woman and nature get mixed up, as in so many of his paintings like The Harvesting (1965), Crucial Month (1968), The Fish Hunt (1976),  The Contenders (1973) and Looking for Fish. I have a feeling that this equation between woman and nature becomes almost complete in After First Shower where a full bodied nude female figure lies sprawling on the rain-soaked ground with all its freshness and ripeness, both symbolizing beauty, maturity and fecundity.

To my thinking Asu Dev was no modern artist in the conventional sense of the term unless, of course, his peculiar technique of juxtaposing pigments is interpreted as an index of modernity.    He had indeed had a few stints with ‘”modern” subjects in works like Composition (1961), Life to the Leas (1962), Symphony (1973), Eclipse (1974) and Shadow of Life (1981) etc., in which he had experimented with non-representational compositions and the breaking of forms. Two or three of his works, e. g., Birth of a New Life (1962), Humanity Uprooted (1968) , Birth of a New Rhythm (1981), also speak of an up-to-date kind of social awareness But my feeling is that although Asu Dev, a self-schooled artist, had indeed acquired certain technical elements of modern European genres and imbibed some of their spirit, temperamentally and emotionally he belonged on the whole more to the traditional Indian milieu than to  the  westernized  one.

That brings us to Asu Dev’s almost complete commitment to this part of the country— the land where he was born and which had given him sustenance. Thus it is that the entire range of his landscapes represents the hills and plains of this region and his life-studies almost invariably feature the traditional rural milieu of Assamor what formed parts of Assamtill the other day. The very fact that he was the pioneer in discovering the practical potentialities of the traditional paintings of this region—he was indeed the first artist to transfer Chitrabhagavat miniatures into large-size mural’s—bears testimony to the whole some truth that Asu Dev did not have a merely “romantic” attachment to the nature and the people of this region, but also had a genuine love and respect for its artistic traditions.   That also includes his concern with the textile designs which form such a significant part of the art heritage of the region.

Finally, a word about the so-called controversy about whether or not Asu Dev’s painting technique was influenced by, or akin to, “Pointillism”, or divisionism” or “luminism” as it is alternately called. While it is true that the laborious and meticulous technique of Asu Dev of building up forms with the help of tiny broken brush strokes did resemble techniques used by Seurat, Pissaro and Signac, etc., it does not appear to me that Asu Dev had the same primary concern with “Optical blending” in particular and scientific interest in the play of light and colour in general, with which one usually associates those European stalwarts. I wonder if Asu Dev’s technique had anything to do-with his lifelong concern with textile designs where the form builds up bit by bit, thread by thread. Be that as it may, that Asu Dev could, and did, dispense with this technique is seen from a number of his paintings, and I have no hesitation in confessing that I find some of these latter more satisfying and moving than many of his more widely acclaimed works done in his characteristic style. They include The Trees (1941), Spring Time (1978), Log Carriers (1979) and above all, My Comrade (1968), the last named I find particularly attractive. Also in contrast to his typical style are the two canvases depicting night scenes, A lazy evening at the Brahmaputra (1966) and Night Awake (1978), both evocative of nocturnal serenity and mystery. I wonder how he would have finished his last work (showing two desolate old women) for which he had prepared two basic compositions. But I like them as they are—bearing ample evidence of sensitive lines and delicate handling of space. Would he have filled them up with dots? I don’t know, and nobody ever will. That is perhaps a measure of the enigma that was Asu Dev.

The author with the Artist during the 1977

One Man Show at the State Art Gallery,

This article was first published in December 1983, for the souvenir publication during Retrospective I