On Looking at Asu Dev’s paintings

“There are no lines in nature, only shapes”-Asuda (the Late Asu Dev) used to tell us, “and that’s why I break up outlines into dots.” It is not a mathematical voice stating that lines do not exist-they are a continuum of points. Nor was it a distant-echo of Seurat and his pointillism delving deep into the optics of colour perception. Nevertheless, in most of Asu Dev’s paintings we face a granular or cellular texture created by his similar ways of applying pigments. This is something which no viewer would fail to observe. Instead of dabbing paints with a spatula as is the want of many contemporary painters, or even with a flat brush. Asu Dev painstakingly covered large areas with dots too big to be called points and too small to be called impressionistic patches. Even the powerful strokes with which he made his sketches were subdued by these dots as if to break up the lines into converging shapes. 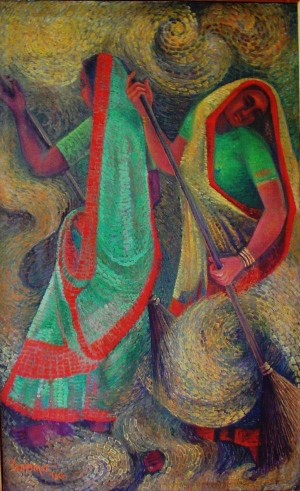 That Asu Dev was capable of using strong powerful strokes and lines hardly needs any mention. Over and above his sketches that fill his notebooks and bundle of sheet, his adaptation of the Chitra Bhagawata miniatures to paint some murals in a private residence bears ample testimony of his powerful lines. (These murals are on the walls of the residence of the late Dr. Bhubaneswar Barooah and we hope they are in good shape!). Shri Nilkamal Dutta’s, writing in 1965 mentioned about the ‘bold straight lines’ of these murals. In his painting in general, the linear quality, though subdued by his idiosyncratic dots is clearly discernible.

I have seen only two paintings (Comrade and the other entitled Composition) which do not have that granular effect. In Comrade Asu Dev uses oil with a translucent effect and Composition is a composition with squares and trapeziums, bordering on the abstract. Barring these, most of his canvases present his characteristic texture, the ‘dots’ painstakingly worked into them. Colour tones are created by the dots and not by gradual shading. If Asu Dev had any link with Seurat’s experiments, theoretically at least were confined to colour tones only. Asu Dev’s dots were a substitute for strokes of brush. So he created effects of movement, even aerial movement (see the whirling patch-dots in Harijan) with his technique.

In my own way, judging from the prints I have seen, there is a striking similarity of total effect of the Greek mosaics of the Byzantine period with Asu Dev’s almost proverbial dots. They are akin in dedication and subtle execution. Like the bits of coloured stones which the Greek mosaic makers used, Asu Dev made use of the various pigments with the tip of his brush. The mosaic makers did that labour of love because of their dedication to the church and the Christ; Asu Dev too, took similar pains to convey his concern for art, life and nature. It’s true, they appear a bit stylized, but what art is not? In his landscapes, the dots appear to be more subdued (Birth of a new life), creating an effect of tapestry. One suddenly recalls, Asu Dev was once professionally a textile designer. Has it anything to do with the cellular quality of his canvasses, one wonders. And again did Beladi (Mrs Asu Dev, who had shared many of her husband’s exhibitions) with her training at ornamental art at Santiniketan indirectly made Asu Dev feel the power of the dots which Beladi uses in her Alpana-like designs? One can guess and leave the matter at that.

Critics naturally found it ‘difficult to place Asu Dev in any school of technique. ‘And rightly so for Asu Dev had no schooling in art and is it necessary for an artist to belong to any ‘school’ as such? Recently, while he was singing his swan-song as far as exhibitions go in 1982 in Calcutta, one critic called him a naive painter, maybe because the critic could collect the information that Asuda did not come through any academic discipline. To me, it appears that naiveté is the last thing that can be said about his work. It is not only because Asu Dev started painting in the thirties, but those who have seen his water colours of the forties cannot but be moved by the freshness of approach. His was no wash; basically tempara but with that granular quality which continued to be his own method even in oils. And his later paintings show a maturity born of deeper understanding of life and diligent work.

About his exhibition in Delhi (1979) a commentator stated, “Asu Dev paints in tempara and patiently evolved a technique which varies from obvious division-ism to stippled, soft combined brush work….At times he brings in a different touch of sur-realism, but Asu Dev seemed to travel the distance and beyond, for art fo Asu Dev is no dogma but a covenant, ‘an article of faith’. To quote Dr Prafulla Dutta Goswami who wrote on two occasions about Asu Dev’s paintings. “Asu Dev has built up a philosophy on what is seen and perceived around him… He has been influenced by techniques, European and Indian, but he is no fashionable artist. He is too obstinate to be somebody’s show-boy.”

This philosophy is a philosophy of poise. Art had been his psychic asylum, his forte. He did not escape into it. He lived in it, and life there had been a perpetual climax and its resultant catharsis-calm of mind, all passions spent. The activity of working through a painting had been for Asu Dev a creative meditation which transforms ‘laukika bhava’ into ‘alaulika rasa’. That’s why, even when the artist tries to capture experiences of agony on the canvas (Life moves on: Humanity uprooted), he does not create agony, but produces art, an aura of tranquillity pervading his work. A review of his Calcutta exhibition (1982) is a pointer to this. In his interview with the reviewer Asuda must have told something about arty in Assam and his state of affairs in his characteristic excited way to make the reviewer feel that Asu Dev as a man embittered by life, án angry and hungry man, frustrated and disillusioned …’; but about his paintings the reviewer wrote :”But all his bitterness and arrogance are strongly absent from his paintings.

Asu Dev stands out more significantly in the socio-cultural backdrop of his work. Life in Assam, nay of North-East region of India has been represented in subtle nuances. Dr Suniti Kumar Chattopadhyaya made a very singular remark about a contribution of Asu Dev. “Though no one sees his painting to consider the ethnic characteristics of his subjects (human forms) it is true that “he (Asu Dev) also did not neglect the people, and among the pictures that he painted there are some very fine studies of Assamese Type.”

Let us make Asuda live more meaningfully to us for he lived for us and let him remain as a symbol of dedication to art of life. 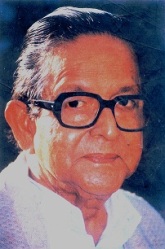 This article was written for The Gauhati Artists’Guild’s initiative to publish a black & white album on ASUDEV & Rajen Hazarika in 1983, by Navakanta Barua, the renowned poet of Assam, who had observed Asu Dev very closely.